An activist’s faith in Danville

Carolyn Wilson is a longtime member of Danville’s High Street Baptist Church and a former civil rights student activist. When the Reverend Dr. Martin Luther King Jr. spoke at High Street Baptist in the summer of 1963, he remarked that Danville was one of the worst segregated places he had ever visited. “I mean completely segregated, from water fountains and toilets to the schools, to churches. Everything was segregated. Everything was designed to make us feel inferior,” Wilson recalls.

During King’s visit to Danville, Wilson had dinner with him. “I just happened to be sitting beside him, and he asked how things were…if they beat us or anything, which they didn’t.” Wilson had just been released from the local jail. If you’ve seen the motion picture Selma, “all those guys who are in there were here,” says Wilson. “They taught us how to demonstrate, how to have sit-ins and stand-ins. They taught us what to do when we were arrested, how to protect our faces from harm. They taught us freedom songs, taught us what to expect…how not to react in a negative way, remain non-violent.” They held their trainings at High Street Baptist Church, a place that’s always been “on the move,” wanting to make living conditions better for local citizens, says Wilson.

Free and enslaved African Americans once worshiped with white residents at First Baptist Church on Main Street, but left in 1865 to build a place of their own. “Brick-by-brick, former slaves built this place,” says Wilson. “Look at the architecture of this sanctuary. You don’t even see any columns to hold it up. Sometimes I sit here and I’m in awe of how they built this building with so little. But somehow, they had the vision to build this church, and just look at it!”

Like many churches, membership has declined in recent decades. The church no longer pays for a maintenance staff. “We had to just let that go and do it ourselves,” Wilson says. “We all work together…our pastor and his wife, those of us who physically can.” 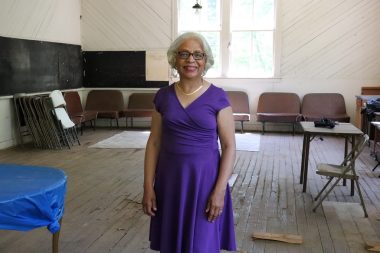 Virginia (Danville, Charlottesville)—Virginia Humanities announced today that their History United program has been nominated for a Civvy Award. The American Civic Collaboration Awards (the Civvys) are the only national awards …

Much is written about incarcerated people. This week, we hear what they are writing and thinking about themselves.

Charlottesville—Today, Virginia Humanities announced a $100,000 grant from the Ford Foundation to support community knowledge bearers and non-academy humanities experts across Virginia. This place-based, digital storytelling initiative will begin in …